The link between providing the highest quality, compassionate care and successful outcomes is the dedication of doctors, nurses, employees, volunteers, trustees and community donors.

We salute our partners, including:

DONORS: Robin Kanarek and Carl Bennett Share ‘Why We Give’

DONORS:  Detective Tom and Claudia Raptis
Patients/Supporters Share ‘Why We Give’

Detective Tom Raptis and his wife, Claudia, suffered the unimaginable loss of their second child in 2013 when Claudia was 7 months pregnant. During the weeks that followed, Claudia read about Greenwich Hospital’s Perinatal Bereavement Support Group in Health Extensions, the hospital’s magazine that features a calendar of community wellness programs. The couple attended monthly sessions with other parents who experienced similar losses, which they found to be enormously healing.

“The support group was great,” said Detective Raptis. “We are happy to do all we can to help spread the word that this type of service is available at Greenwich Hospital.”

When Detective Raptis received a special award for his volunteer work and 27 years of service on the New Rochelle Police Department, he immediately knew he wanted to use the funds to give back to Greenwich Hospital in recognition of the extraordinary care he and Claudia had received.

The monetary award was almost equivalent to the cost of a CuddleCot™, a special piece of equipment Claudia read about online that helps give parents of stillborn babies more time to grieve. The cooling device preserves a stillborn baby’s body in a bassinet or crib, extending the time a family has with their child before needing to part with him or her. About 24,000 babies are delivered stillborn in the United States every year. Parting with a stillborn baby is a long and difficult grieving process, and the CuddleCot is designed to make that journey a little easier. Greenwich Hospital will be equipped with a CuddleCot in the near future, thanks to the generosity of Tom and Claudia.

“I saw the award as the perfect opportunity to give back,” said Detective Raptis. “We had all of our children at Greenwich Hospital, and the staff there were awesome, each and every time.”

The Perinatal Bereavement Support Group is for families who have suffered a perinatal loss through miscarriage, stillbirth or neonatal death. The group meets the second Wednesday of each month, 7:30 – 9:30 pm, at Greenwich Hospital. For information, call 203-863-3417. 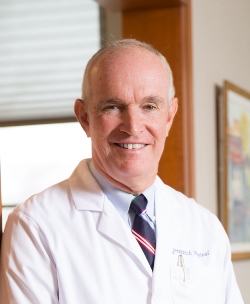 At the GLOW Gala for Greenwich Hospital on October 23, Norman Roth, president and CEO, remarked of Dr. Phil McWhorter, the 2017 President’s Award recipient:

Dr. McWhorter is a pillar of the Greenwich community. Throughout this distinguished 40-year career, his leadership has made a tremendous impact on Greenwich Hospital.

Dr. McWhorter has an unwavering commitment to his patients, with numerous accomplishments in the surgical field. He began his career at Greenwich Hospital in 1977, where his expertise in surgery has had great influence over the entire medical staff.

Not only has his knowledge and skill expanded the complexity of surgery performed at the hospital, but as a great leader, he also took on the mentorship of many surgeons on the hospital’s staff. He is known as a “surgeon’s surgeon,” where his opinion is often sought by other surgeons on difficult cases.

Over the span of his career, it is estimated that Dr. McWhorter has performed over 20,000 major operations and 15,000 minor surgeries, impacting the lives of so many in our community. But, Dr. McWhorter is not a detached clinician. His patients are put at ease by his good nature and charm. He genuinely enjoys getting to know his patients, remarking

Everybody’s got a story, and I get to be a part of that story.

Dr. McWhorter’s commitment to helping others is admired by all whose lives he touches.

The Annual Fund for GH