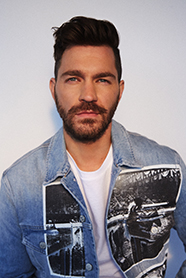 Since his 2011 self-titled debut, Grammer has scored seven chart-topping hits, including the single “Honey, I’m Good” which reached quadruple-platinum status globally and emerged as one of the best-selling songs of 2015, hitting number 9 on the Billboard Hot 100. The recent 2019 release of his fourth full-length, Naive, has received critical acclaim. The album’s lead single “Don’t Give Up On Me” is featured in the big screen drama Five Feet Apart, and clocked 18 million Spotify streams in just three weeks. Grammer was a popular contestant on the hit TV show Dancing with the Stars, and he recently made headlines for his fervent support of women in the workplace.

“We are grateful and excited that Andy Grammer will be performing at the Greenwich Hospital Benefit. Not only is he an extraordinary talent whose music is sure to delight all attendees, but he is also a wonderful champion of women, which aligns with our hospital’s values and clinical emphasis,” says Norman G. Roth, president and CEO, Greenwich Hospital.

While Grammer consistently sells out his headline performances at large venues, the Benefit’s attendees will have a one-of-a-kind opportunity to see the musician perform in a uniquely intimate setting.

“I am thrilled to be performing at Greenwich Hospital’s Benefit 2020. Having grown up on the east coast and being able to perform for this community, while helping support neuroscience, pediatrics, and women’s health, is an honor and pleasure,” says Grammer.

This year’s benefit celebrates honorees James A. Brunetti, DO and the Arthur and Elizabeth Martinez Family. Arthur C. Martinez is retired from a distinguished career as chairman, president and chief executive officer of Sears, Roebuck and Co., leader of other corporations, and director of boards of Fortune 500 companies and various nonprofits. He has played an active role on Greenwich Hospital’s Board of Trustees, beginning in 2002. Since then, Mr. Martinez has led or co-led the board for three distinct terms. Greenwich Hospital is a cause that Mrs. Martinez has supported as well. She has been a dedicated volunteer on hospital fundraising event committees.

Dr. James Brunetti is an internist and second generation Greenwich resident. As former chief medical resident at Greenwich Hospital, Dr. Brunetti embraced the values around patient care that became a guiding principle in his private practice. In 2001, Greenwich Hospital awarded Dr. Brunetti the prestigious Partner in Care Award. He was the recipient of the Patient’s Choice Award in 2009, 2010 and 2011, an award conferred on the top ten percent of physicians. Also in 2011, Dr. Brunetti won the Father Rufin Compassionate Care Award bestowed by the Bishop of Fairfield County.

For more information about sponsorship and tickets, contact Stephanie Dunn Ashley, director of special events, at 203-863-3860 or email Events@GreenwichHospital.org. Additional information can be found on Greenwich Hospital Foundation’s website: http://giving.greenhosp.org/benefit-2020.

Photo caption: Singer and songwriter Andy Grammer will perform at The Greenwich Hospital Benefit for Neuroscience, Pediatrics and Women’s Health on May 15, 2020.

Greenwich Hospital Foundation is committed to securing the funds needed for the hospital to fulfill its mission of extending the highest quality of safe and compassionate healthcare to everyone in our region, regardless of their ability to pay.